Barnett Newman Made My Mom Cry

Posted on March 2, 2018 by abiggerworldyet

Here I am crying in solidarity with my mother over these paintings.  (Well, not really….)

Granted I think she was tired.  This woman who was a polio victim at 18 had been keeping track of a husband, two teens and a pre-teen, while we negotiated monuments museums and war memorials.  Perhaps her outburst was just a byproduct of a very long day herding family to all the sites and wonders that get wrapped into a, “vacation.”

This event’s genesis actually all began with me watching Saturday morning cartoons.  I made a regular habit in my childhood to watch cartoons from 7-10am on Saturday.  I had a schedule to keep, so much so, that every Fall I would study diligently the new T.V. Guide and draw out a chart of what my Saturday morning cartoon routine would look like (8:30am Scooby Doo – channel 12, 9am Looney Tunes – channel 3…).

Folks of a certain age like myself may recall that CBS was mind-full in getting kids interested in something more than just how does the Road-Runner once again foil the Coyote, or what new candy a kid should buy.  And so, while watching Bugs Bunny or the like, a set of colorful globes would whirl onto a black screen with an attention grabbing repetitive set of notes that sounded like an electronic percolator.  The words, “IN THE NEWS” would appear whirling around the final stationary sphere. You would get a teaser, some commercials and then the news feature.

In 1978 the East Wing of the National Gallery of Art in Washington DC was opened up and a Saturday morning “IN THE NEWS” did a feature on it.  Designed by I. M. Pei, the building was as modern as you could get, looking like a stocky capital H that was in the process of dividing itself into shards.  Being a budding artist I thought it looked fascinating. Watching the news feature, to my ears I understood that one of the angles on the building was “as sharp as a knife.”  I couldn’t imagine!  What if someone “accidentlly” pushed someone against it?  Were there guards protecting people from that part of the building?  Let’s just say that while I was wandering with my family inside the museum part of me was simply fascinated that the government would build such a deadly piece of architecture.  In hindsight I realize the news commentator likely said that one of the edges of the building “appeared” to be as sharp as a knife, but even recently while in D.C. I eyed the building with a little suspicion.  The cutting edge I. M. Pei building wouldn’t be the only thing I misunderstood in this story.

So, after seeing the news feature about this amazing blade-wielding modern building full of the most contemporary art the 1970’s was capable of cranking out, I asked my parents if we could go see this place of wonder on our vacation to D.C.  We arrived to the Gallery late in the day having done a myriad of other must-sees.  Now I was a regular at the Phoenix Art Museum in my home town, where I took summer classes and the like, but my family was not necessarily people that would visit an art museum any chance they got, nor were my parents art aficionados, although they were very good about buying lovely original benign landscape paintings at local art fairs.  All that to say, that afternoon in D.C. the Modernist art wing of the National Gallery was a bit unnerving and baffling to all of us.

As we passed works by Pollock, Miro, Kline and Nevelson I recall my parents saying, “Where’s the real art?”  I’m sure I must have been smitten by the work of Calder if not for the size, at least for the playfulness, but for the most part, Modernism was leaving a bad taste in all of our mouths.  Then, we began seeing them: signs throughout the museum saying, “Stations of the Cross this way.”  So we began negotiating our way to where these hopeful markers led us, like following bread crumbs in a desert.  My mother excitedly said, “Now we will see some real art!”

Rounding a corner with a balcony adjacent, a gallery opened up to us on our left with signage making it clear that we had arrived at our destination.  There on the walls encircling our family were fifteen large paintings that resembled to me at the time very simplified bar codes, like those I’d find on the bottom of my cereal box, just not that complicated and much bigger.  And it was there that my mother burst into tears saying “They’re making fun of my Jesus!”  As she was in a wheelchair, one of my siblings or I pivoted her quickly away from the offending canvases to the balcony near the gallery as she sobbed.  A blonde woman around my mother’s age came to her side as mom looked forlornly into the cavernous interior of the museum.  The woman gently asked, “What’s wrong?”  To which my mother explained about the paintings and how they were mocking her faith in Christ her Savior who means the world to her.  I remember clearly the woman saying, “Well, I’m going to write them a letter.  That’s not right!”

I went back into the gallery of bar codes in a circle to find my dad looking about the space.  The guard in the museum had seen my mother’s reaction, which clearly perplexed him.  Why would this woman sob as she viewed these paintings?  He walked up to my dad and asked a very simple question.  “What are the Stations of the Cross?”

If you were to ask me even last year, I would’ve told you this story and said that Picasso was the culprit. It was he that had made my mom cry.  As I entered college and went on to graduate school in art and even began to teach art history, I always have been looking for these paintings by Picasso, but never could find them.  Of course I never could find them because they were by Barnett Newman, an Abstract Expressionist painter.  I didn’t discover the truth until visiting the East wing of the National Gallery of Art this past November with friends.  As the Sunday school answer in your standard Christian church is most likely, “Jesus,” I think my default setting for modern art as a kid was “Picasso,” and so, in my twelve-year-old mind, he was the culprit (and let’s just say I’m sure he made a number of women cry in his life time, so he’s a fair target).

When in the National Gallery of Art this Fall I had told my friends Kiki and Anne this story.  While we enjoyed some Rothkos, Kiki rounded the corner to the next gallery and then returned.  “I have a surprise for you Tim.  Come here.”  And she led me into the circle of Barnett Newman’s work.  The series began for Newman (who was Jewish) in 1958 when he was recovering from a heart attack. He created two canvases, each 6 ½ by 5 feet, and began his series.  Over the next eight years he created the other 13 works. All of them are black and white acrylic on raw stretched canvas. The exception is the 15th “additional” painting he added (to the traditional 14 Stations of the Cross), mysteriously entitled “Be II,” which has an orange stripe in it. My mom’s analysis was merited in that even art critics and others at the time the work was unveiled greeted them with puzzled looks and derision.  What could these abstract works say about the suffering of Jesus?  Newman clarified that the work was a single unit and statement about Jesus’ universal cry from the cross “My God, my God, why have you forsaken me?”  And now, whatever any one thought at the time, they are regarded as some of Newman’s greatest works. 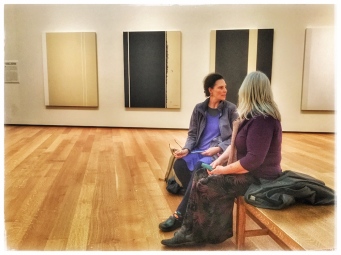 My friends Kiki and Anne with the work.

Looking around at these paintings 39 years later multiple streams of thought came to mind:  One was that if creating these works somehow got Newman in touch with the suffering of Christ, what a good thing indeed and that’s enough for me.  Secondly, Modernism in all of its austerity and high-brow thought can unfortunately come across now as simply neutral decorations for corporate office buildings.  And three, Abstract Expressionism is in an endearing way, quite optimistic about the power of art. Those artists believed that this simple gesture, this movement, this mark, matters. The end result is important and deserves reverence. Sounds a little like an act of faith, doesn’t it?

Now as an adult seeing the work again, I realized I was around my mother’s age when she cried.  How wonderful that there are those who take what they believe so seriously, so tenderly, that matter, matters.  The Museum said this work was important, gave it authority by putting it up the gallery and that made my mom sad.  Sorrow is love, and mom was simply grieving because she thought someone was making fun of someone she loved.

Things change though when one is given more information, doesn’t it? It’s interesting to note that now since 1987 there has been an Episcopal priest, Rev. Bruce Stewart, who has gathered folks on Good Friday to contemplate these works and Christ’s suffering as a yearly spiritual practice.  Perhaps with a little education my Mom would’ve joined them.

Granted, Mom was hurt in part by what she didn’t understand.  What would it would’ve looked like if my dear mother had known more about the paintings and the man that made them?  What would it have looked like for her to see him and his story and recognize that perhaps these paintings were a risk for him?  They were a testimony of his journey.  He was Jewish and choose to entitle a set of work, “The Stations of the Cross,” reflecting on Christ’s lament.  No wonder folks were a bit taken aback by the work.

Whatever you may think about Abstract Expressionism there was a soul behind that painting that was trying to figure life out.  Perhaps by painting acrylic lines on a canvas after a heart-attack, and seeing how fragile this thing called life is, he was a little more in tune with the One that suffers along with all of us.

Perhaps I’ll meet you at Barnett Newman’s paintings in D.C. on Good Friday, and we can see to where and whom the cry leads us. “My God, My God, why have you forsaken me?” Maybe we will let the work cry, or maybe we will.

(If you wish to pretend that you are in the 1970’s watching Saturday morning cartoons and get to see an “IN THE NEWS” news feature, click HERE. Thanks also to Rick for your editorial help.)

Visual Artist Brother Sojourner College Professor Christ follower
View all posts by abiggerworldyet →
This entry was posted in Artists of Interest, Faith Walk and tagged Art, art and faith, art and life, Barnett Newman, National Gallery of Art, Stations of the cross, stations of the cross paintings. Bookmark the permalink.

1 Response to Barnett Newman Made My Mom Cry