Posted on November 21, 2012 by abiggerworldyet

An photo of Vik Muniz’s work. These were based on classical paintings and each are made up of objects and garbage that he arranges on the floor. Click on the picture for a better and closer view!

I’ll admit that when I first saw a Vik Muniz’s photograph in the Phoenix Art Museum, although interesting,  I wasn’t that taken by it.  It was curious that he created an image out of objects and photographed it, but it seems like yet another art world gimick.  Being an artist who enjoys assemblage as well, I wondered why he simply didn’t make sculptures and show us the real objects like Tony Cragg or the like. 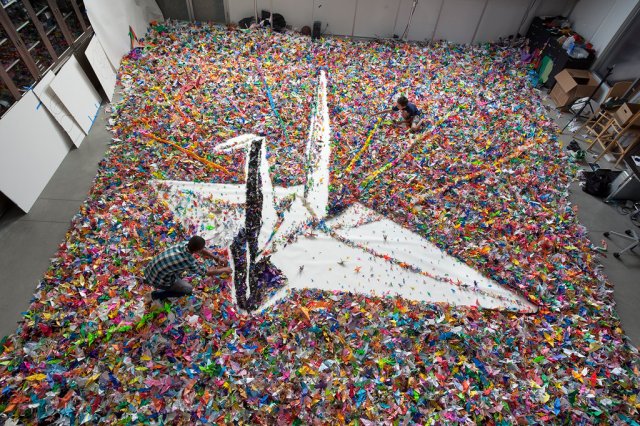 Here is a group arranging one of his pieces. It gives you a good idea of the scale of the piece.  It is 36 by 40 feet.  Click on the image and you’ll see it is made up entirely of paper cranes.  Made out of over two million cranes by New York city school children, they were then each sold to benefit those who were effected by the tsunami in Japan.  Is that cool or what?

Ah, but as you get to know someone, that is when you perhaps find yourself drawing either further away, or further in with them.  I’ll admit, I fell in.  The more I saw of his work, and after viewing the documentary “Wasteland” which chronicles his work with a group of trash-pickers in Brazil, I was impressed.  Here was a well known contemporary artist using his status for good and to help others, not just looking for additional ways to give himself more accolades.  Muniz’s work at least for me began looking very thoughtful and not just about doing flashy contemporary art, but perhaps it was actually about making this world a better place.  What a concept eh?  I highly recommended the film, and now his work.  Below is the trailer:

1 Response to Vik Muniz and “Wasteland”