Posted on August 15, 2010 by abiggerworldyet

I have been working as of late to finish three shadow boxes.  One of which will be used as the book cover for a book that I have been writing for over the past four years (there I said it).  Below “Brother’s Keeper” is the first I’d like to show you.

I was struck with some irony that today at church our pastor Gregg spoke on the scripture from Genesis 3 that this title can trace its origins to.  In addition, yesterday I was at the Portland Art Museum with two alumni of the art department at George Fox and we were looking at R. Crumb’s illumination of the book of Genesis http://portlandartmuseum.org/exhibitions/feature/The-Bible-Illuminated-R-Crumbs-Book-of-Genesis.  One of the panels I did read of the numerous pages on the wall was his interpretation of this verse where Cain killed Able.   Lots of parallels as of late it seems.

It’s interesting the process that went into this piece.  I intended all along for the glass figure with the flame head to be the main figure (from an earlier post) in the work, only to switch it on the last day with a small plaster replica of the  Lion of Lucerne statue (found in Switzerland).  It worked much better for the composition, and was much easier to read visually.  Hope you like the piece. 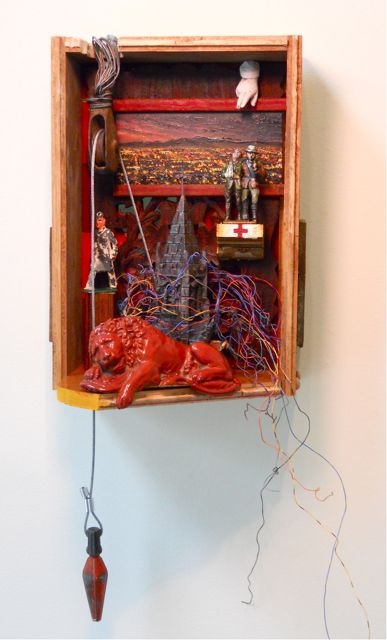 "Brother's Keeper" detail - recognize that painting from an earlier post? I like the little blessing hand. That is courtesy a wonderful Catholic shop in Belgium. They sold me broken parts of statues; is that wonderful or what?