Variations on a Theme

Posted on September 15, 2009 by abiggerworldyet

When I was about seven, I received a toy my parent’s gave me that they had gotten in their travels to Ireland.  It was a wooden stacking head of a man with blue eyes and a yellow pipe.  The brim of his hat was a palette and in the top of the hat he carried a paintbrush.  I loved it, and used it again and again till it began falling to pieces.

As an artist about fourteen years ago I ran onto that toy, and ended up using an image of what was left of the Irish wooden-head in a mixed media painting.  The top part of his hat that had fallen off I decided to use that part as the head of an all-together different figure that I was building from miscellaneous discards.  I would use that second figure in a large watercolor.

About a month ago I ran onto both of these figures in a cupboard and put them physically back together, placing the part of the hat (that was now the head of the one figure) back on top of the head of the original Irish toy. Viola!  I had found a whole new content to the figures that resonated with the theme of brotherhood that much of the work is tackling as of late.

So, when cranking out monotypes at the Atelier Meridian a couple of weeks ago, I decide to use them as the central figures of one the prints.  When I returned home to finish the eight ink and watercolor pieces I found the two joined figures would work perfectly in the structure and content of one of those works as well, and so there, I rendered them in gouache. You will also notice that I used the Irish figure as a singular unit in the work, “Community Has Its Perils” from an earlier post. 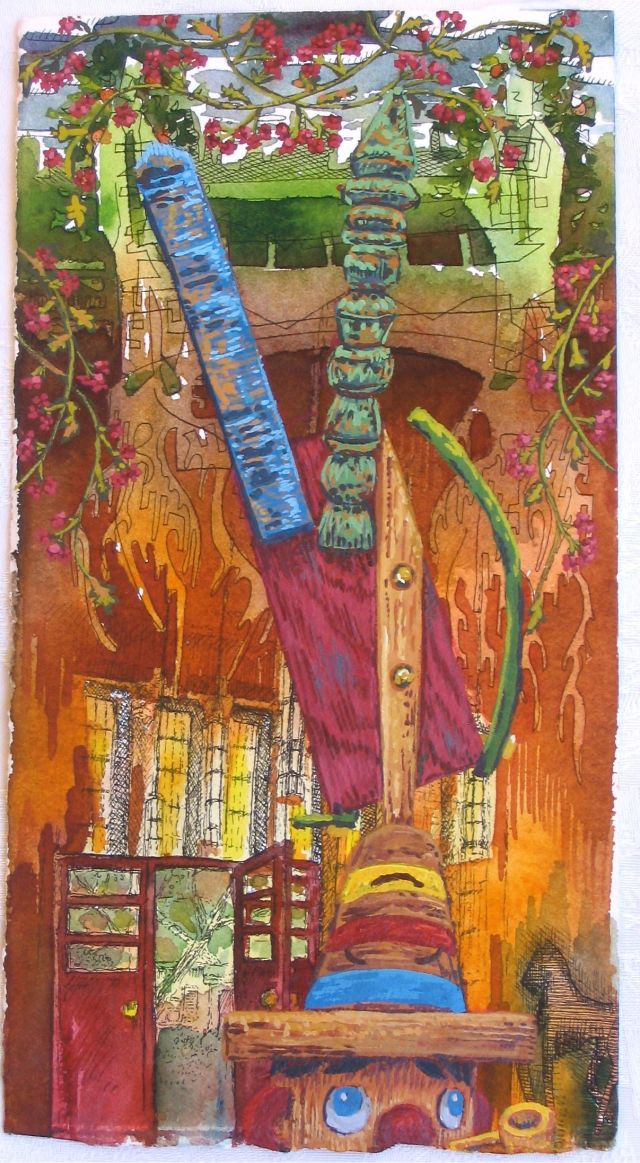 The titles of the works here you can find in a quote found on this blog as well.  There is something very rewarding when the muse is working…  It’s all connected indeed.